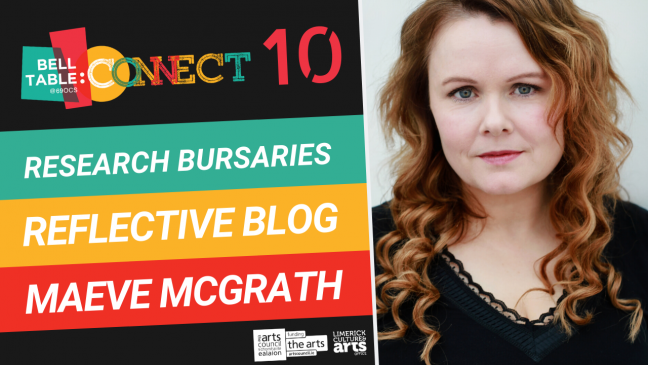 In the late 80’s I went to Ballyferriter to Dún An Óir with my Irish class from school. It is my only experience of Irish college and a little different to the normal Gaeltacht experience as I knew my classmates. We had only one class in my school doing honours Irish, I was not in that class and was moved up so I could take honours Irish in the Leaving Cert. I was way behind and while the rest of the class was all A’s and B’s, I was a D at best. But I loved the language. I may not have been up to speed on the Módh Coinnoíollach and the Aimsir Fháistineach but I loved speaking ‘as Gaeilge’ and even though the class was a struggle for me, I did jump to a C in my Leaving Cert exam in honours Irish and I was delighted.

When we went away to Ballyferriter, it was wonderful. I remember it with such fond feelings and in these photos below, that I managed to unearth, this teenage me was revelling in the Kerry countryside and speaking my native tongue. I wanted to start my research exploring when did Irish College start. I discovered that when you start a search about the origins of Irish Colleges, there is a lot about Irish college in Rome in the 17th and 18th century and not quite the answers that I am looking for. So I have to be more specific, and the words, ’residential summer gaeltacht courses’ offered me more information. I found out that the first Irish college was about 1904.

I didn’t expect that, assuming dates in the 50’s or 60’s. I wanted to see if I could find film footage of Irish college and while there was a lot of film online relating to recent years, especially with Coláiste Lurgan, I couldn’t find a lot in earlier years. This piece of film from Radharc on the IFI player gives a snapshot into 1960’s Irish college in Ranafest. The routine from meals to learning to sports to ceilís in the 60’s seems similar to now, just different fashions and hairstyles!

On my week of thinking and researching, I wanted to develop a short survey. I hate long protracted surveys. This one allowed for tick box style questions with room for comments, only if you have time. I always like a survey that allows you to move through quickly. I ask about age, gender, years attended and where. These questions are relevant to finding out who has been to Irish college and when. I wanted to see what songs people might remember and also did they return.

Survey results started to come in thick and fast. In general, a lot of love for the Gaeltacht but one person really didn’t like it and is very forceful in their recollection. Reading through online experiences of Irish college there was much talk of the ceilí, ag imirt peile, long walks back to the Bean A Tí and of course the first kiss. Overall my survey respondents loved Irish college, over 95% loved it, 60% of respondents went back and An Dreoilín was a familiar song to many. My survey threw up many questions and thoughts about Irish college. Is it elitist? Can those with limited funds afford to go to Irish college? Some courses I saw had fees from €700+. And I would say that there is a deeper investigation to be had there. For me, coming from a family that had very little money, the credit union was where money for all the courses we did in the 80’s came from. I had two sisters and a brother and money was very tight so when the tap dancing or soccer camp or Irish college course came up, a loan from the credit union covered it. This was paid back over the following months and sometimes years. So I considered myself lucky to have had the chances I had as a child.

Some of the comments included:

“First kiss, first boyfriend. Sneaking off to the fields with longest grass because they were the easiest to hide in. Best days ever.”

“……..an tra, comórtais amhráin, lining up according to your teach, bean an tí, beans with everything ………lots and lots of laughing.”

And someone who hated Irish College:

“Torture. Forced to learn something like it’s the 1920’s. Anyone with nostalgia about kids punished for speaking English, segregated dances and a language hardly anyone can speak or wants to is seriously deluded…..”

As I moved through the week, I started to imagine how this idea could move into a performance or event. Always in the back of mind was the idea of ‘….if we ever get back into a theatre..’ which is a real concern for all in the arts under the current climate. But I did imagine working with young people in the performance, that maybe, they would tell the story as it developed. I doubt that it would be an online performance but I think it would utilise a variety of artforms from dance to film.

Having the time to explore this idea gave me the chance to believe that this idea could become a performance piece. That there was potential. So I will continue to research and dream, to look at possible co-producers and hopefully build a performance that an audience in the not too distant future will sit in and experience.

Míle buíochas to all at Belltable and Lime Tree Theatre for the support and encouragement.