Well, to do it effectively with regard for the experience of the audience member at home aswell as the audience in the space (if any) it isn’t. It isn’t exactly Theatre and it isn’t Film either, it lies somewhere in between, in uncharted territory, a space that is new, exciting and potentially quite daunting. END_OF_DOCUMENT_TOKEN_TO_BE_REPLACED

My week at the Belltable: Connect Translating Live to Online workshop was indeed an experience I was really looking forward to. I was thrilled to work with Simon Thompson and explore the masks in theatrical research. Working with Johanna O’Brien was also really enriching as she has got a lot of film experience and my one would be mostly theatre based, so from the start that was an interesting match. END_OF_DOCUMENT_TOKEN_TO_BE_REPLACED

The certainty of being able to perform and share stories in a theatre space is painfully fickle in these difficult times. I applied for Translating Live to Online to explore whether it was possible to reach out and share stories with others while the barrier of government guidelines are in place. END_OF_DOCUMENT_TOKEN_TO_BE_REPLACED Much like many people who work in the arts I was anxious to get back to working in a collaborative space. When I read about this workshop programme I immediately applied. Trying to capture live performances in interesting and engaging ways had been something that I had been thinking about for some time and it would be fair to say that I came into the week with preconceived notions about what translating live to online would be like. Many of these ideas I had were challenged and more interesting notions on how to accomplish this task were introduced. It felt incredible to be back in a space working with others and learning all the time from them as we approached this largely unexplored aspect of live performance. END_OF_DOCUMENT_TOKEN_TO_BE_REPLACED My week at the Belltable:Connect Translating Live to Online workshop was an amazing experience. Having the opportunity to work with both Simon and Martin was very beneficial and enjoyable. The main aim for the week was to try to create the feel of “live” performance through the medium of a screen, ie. pre recorded. At the beginning of the week this felt very daunting as we have all been in performances that were recorded before, but we have never tried to convey this “live” feel before. One of my biggest challenges was trying to get understand the concept fully. When watching theatre online and I see performances on the stage I can suspend my belief and get the “Live” feel but as for other locations I was finding this difficult due to seeing so many movies and tv shows. END_OF_DOCUMENT_TOKEN_TO_BE_REPLACED 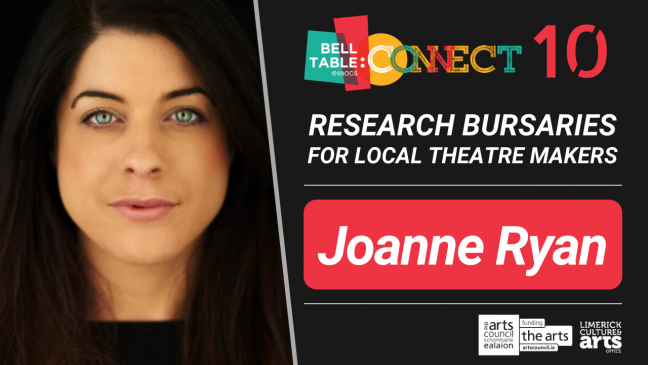 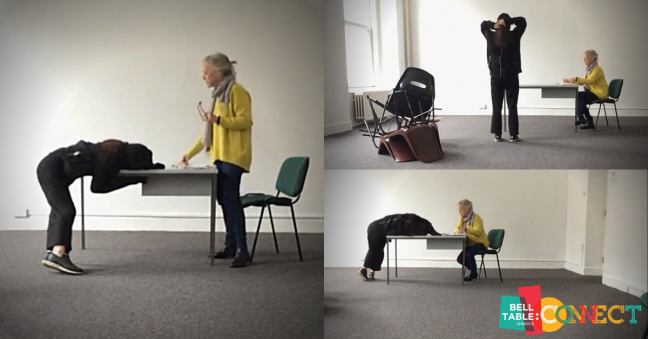 Reflective blog written by Mary Nunan about her experience researching The Hood collaboratively with Jo Slade in Belltable Hub as part of the New Work Commission 2020.

Throughout 2019 Jo Slade (poet/visual artist) and I (dance artist) began exploring some ideas (for performance) based on a text that Jo was working on comprising a series of poems, in draft form. The poems use the contemporary ‘hoodie’ as a metaphor to explore such issues as: identity/ anonymity, centre/ periphery, body/not body. As part of our research we were looking at how we could use text and movement improvisations to disrupt fixed meanings attaching to these terms.

The process was long and slow. Because of the complexity of the themes we were exploring we did not want to take any short cuts. Belltable Hub provided a perfect environment for us: a warm, clean, light-filled space with a really reasonable rent. The latter was important because it, literally, afforded us the opportunity to take the time necessary to incubate our ideas. Interestingly, as time went on the room itself (dimensions/sparseness/atmosphere) became a source of inspiration for the work!

At the end of August we presented our Research-in-Progress (4 sessions presented over 4 days to an invited audience). The presentations took place in Studio 1. We received really positive and helpful feedback from our audience. So we must go on!

For the next phase, we want to continue to explore our core themes and deepen our research into the content and structure of the emerging work. And we also want to explore some ideas about possible (innovative) performances contexts. We are looking forward to doing this should our application, to the Arts Council, for bursary funding be successful.

Special thanks to Marketa and all the Belltable staff for their support throughout and especially for the care they took with all the Covid protocols. It was a very safe house to be in (poetically and practically) at all times!

I’ve been making theatre for as long as I remember. Acting. Singing. Directing. Thankfully never dancing. Much. A jack of all trades like so many of us in this business.

But for my Belltable 10 Connect bursary, I wanted to spend some time focusing on the thing I’ve dedicated most of my time in Limerick over the last decade, which is producing theatre.

END_OF_DOCUMENT_TOKEN_TO_BE_REPLACED

Local theatre maker Ella Daly is one of ten recipients of Belltable:Connect 10 bursaries to explore a new creative idea during the month of May.

Ella has been exploring the theory of ambiguous loss through theatre. Watch her vlog below to find out more. 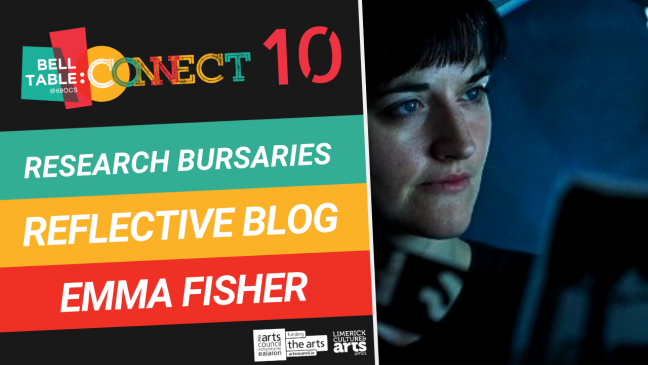 Prosthetic science looks at man’s need for wholeness, artificial limbs were developed for cosmetic appearance, function, and a spiritual sense of being complete but have developed to be so much more. Through storytelling, puppetry and object theatre this play looks at loss, life and coming to terms with a different form of completeness while tackling ableist views of the body. END_OF_DOCUMENT_TOKEN_TO_BE_REPLACED