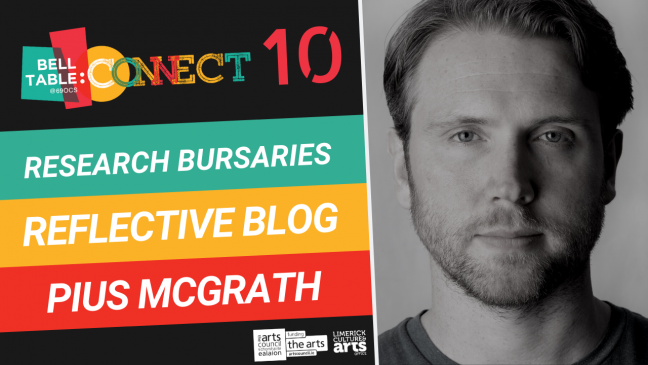 We find ourselves living in a time of great change. We know this, we see the seismic shifts happening all across society, nobody has been left untouched by the events of these last few months. The year 2020 will live long in our memory, its outcomes etched in our psyche indelibly. Yet despite this, we have endured, we have adapted, and we hope for a better tomorrow.

And that is where my research began, with Hope. But what is Hope? There are slight variations in its meaning, but it is universally understood that Hope is either ‘a desire or expectation that things will go well in the future’ or ‘a belief that something good may happen’.

The essence of our existence relies on Hope. That being said, I think it is also fair to say we have all tried at some point during this period to escape the surreal existence we have been living. Hoping it would have passed by the time the next Netflix credits started rolling.

We have good days and we have bad days, and that’s okay. Nobody was prepared for this.

Most of us have used Art as our escape. Whether it has been binge watching a show on the plethora of streaming sites available, tuning into podcasts we didn’t have time to listen to previously, watching home concerts, attending the weekly family zoom quiz (every family has one), or picking up that book you bought yourself two summers ago, unread until now, the list goes on.

We are together but we are apart. We are connected even though we are distanced. I miss Live Events, I miss Theatre, I miss the shared experience. The shared experience of any live event for me is what makes it special, more special than anything pre-recorded. A friend of mine recently said to me that they miss the opportunity to be at a live event and perhaps say afterwards ‘I was there when…’.

The ‘I was there when’ factor, that moment when it is a perfect storm between the Performer on stage, the Audience, and the energy in the room. If you are lucky enough to have one of those ‘I was there when’ memories, remind yourself of it from time to time, it will do you some good. I’m lucky to have had a few of those moments in my time working in Theatre and Live Performance.

One of these enduring memories for me is a production I was in, starting out early on in my career, performing with The Torch Players in Limerick City. It was in a Farce by Brian Friel called ‘The Communication Cord’, staged at the Belltable off-site space on Cecil Street in 2009.

The play is a send-up of Friel’s own sentiments in his play Translations. The piece starts off quite verbose but when it was put in front of an audience and not being bounced off a rehearsal room wall for the umpteenth time something happened, the Play changed, the performances changed, and the energy in the room galloped along with us when the most outlandish sequence of events in the Play unfolded.

Every night there was laughter, much laughter, in particular, in the closing scene on one of the final nights of the run. A certain prop ran awry on an actor and caused so much hilarity for the audience that the cast (myself included, if not more so than others) struggled not to corpse -through the last lines of the play.

I miss that, that communal shared experience. We need that, to laugh uncontrollably at the ridiculousness of the situations unfolding before our eyes. We need comedy, we need it to interpret our world and we need it to fortify hope.

After all, Hope is the essence of comedy. In the Steve Kaplan book titled ‘The Hidden Tools of Comedy’ he writes: ”The Comic Equation is: Comedy is about an ordinary guy or gal struggling against insurmountable odds without many of the required skills and tools with which to win yet never giving up hope”.

We are in some respects today facing what may seem like insurmountable odds, but we must still have hope. What seems more insurmountable than our own demise? We struggle, we adapt, and we overcome, that is the basis of the human condition.

This brings me to the opportunity provided by The Belltable Connect10 research Bursary to explore and develop an idea. Simply, it is a luxury. It happens rarely in this country for many independent Artists to receive such an award and I do not take this opportunity lightly.

There is a responsibility on the recipient to commit oneself to investigate a topic, an idea or a concept and come back with some findings. They can be findings of self-realisation, ‘That idea isn’t for me so lets explore this one instead,’ or creative discovery, ‘This topic is taking me somewhere completely different from where I started’. It can all be a part of the one process, in the action of ‘doing the work’, so to speak.

I started with the idea of Hope and went from there, I asked myself the question: ‘Comedy gives people hope, but how does it do it?’.

That question took me travailing through a swathe of work by comedic writers and performers, from the texts of William Shakespeare and Noel Coward right through to Anne Lamott’s famous book ‘Bird by Bird’, which is a fascinating examination of writing and life itself, full of nuggets like this one:

”…hope is a revolutionary patience; let me add that so is being a writer. Hope begins in the dark, the stubborn hope that if you just show up and try to do the right thing, the dawn will come. You wait and watch and work: you don’t give up.”

I watched old recorded performances of the great vaudeville-style performer and clown George Carl for his physical comedy prowess. I examined the genius timings of Dick Van Dyke for cuing and delivery. I explored a world of Irish folklore to see what are some of the reasons that brought our ancestors around the fire to share their experience together. (Notably, the Seanachai Eddie Lenihan has a very interesting podcast series called ‘Tell me a Story’ on Spotify that is definitely worth listening to.)

The process is never-ending and that’s the thing. I have spent days and weeks reading, writing, and studying the work of many of those creatives who have gone before me. Every Artist is connected on some creative level, everyone’s work and processes influence someone else’s, There is a synergy in that, a combined matrix of ideas and infinite possibilities, enough to give any person hope.

This bursary opportunity has allowed me the freedom to work on developing a new piece, currently under the title ‘The Black Handled Knife’, a comedy hopefully, full of robust characters who are ready to take on whatever life may throw at them, full of hope hopefully, at times idiotic hope but hope nonetheless. Characters like Lachlan Pearse, who never know when they are defeated, and can maintain that power of being cheerful even in circumstances we know to be desperate.