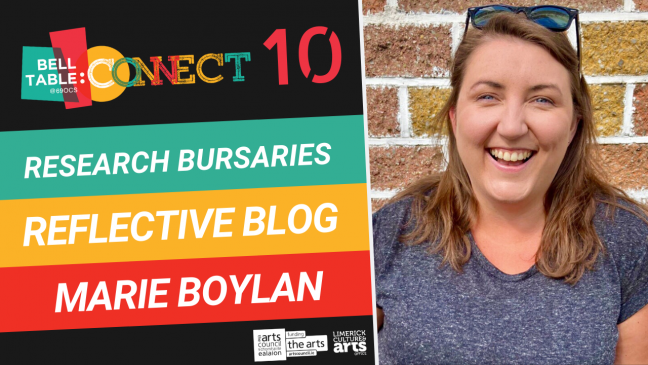 I applied to this programme with an idea that I thought might be interesting- but on further deliberation, I discovered that the idea was little more than a concept. A concept is a great place to start, but if you are unable to develop your idea further then as a theatre-maker and storyteller it becomes redundant. One of the fundamental attributes of a good theatre maker is the ability to edit your own work and having realising when something isn’t going to work, so I changed my idea.

The beauty of Research and Development projects is that it allows artists time to play with ideas and to think- without the pressure of producing a masterpiece or the pressure of going into full production straight away.

So I went back to the drawing board. After a few days thinking- I decided that I definitely didn’t want to explore any morose ideas (it’s pretty much all we hear about these days) And sometimes when your uninspired, the best place to start is at home.

One of the things that has struck me over the last few months is that everyone’s lives have been changed irrevocably- there’s a new routine. We all have so much more time on our hands. We can watch the world around us- and study it as a microcosm of society.

In the recent months I’ve found myself observing the comings and goings in my little cul-de-sac under the guise of working on my tan. This eight-house dwelling reminded me of the film Rear Window. Suddenly I was Jimmy Stewart unable to leave my house due to circumstances beyond my control. There’s only so much Netflix that one can handle- and I sought entertainment from the human world around me. Humans crave interaction- any interaction.

During the first two days of my R&D I started to develop the neighbourhood ‘Greenview’ where my characters live. In Greenview there are ten semi-detached houses in a circle. The protagonist lives in number five and watches the comings and goings of her neighbours. She is a typical curtain twitching busybody- and knows everything about everyone. Her best friend is May-Bell who lives next door in Number six. But May-Bell has been dead for the past year- so she talks to her ghost. She is a very opinionated and uncaring neighbour always in competition with the rest of her neighbours. She doesn’t like any of them and has given them all nicknames based on their personalities. There’s Ann and Barry (the ‘happy’ cookie cutter couple), Ray Liotta with his pit-bull Tracy (named after his ex-wife) and Principal Skinner (who performs a secret drag act nightly on the internet) to name a few.  Some of the characters are ‘cuckooing’, others are escaping from their families and others are baking sour dough- even though they claim to be gluten intolerant.

As it stands, I’m writing it from this woman’s perspective, a monologue piece. But this isn’t set in stone, it may change.

While developing the characters and neighbourhood- there was one thing that was missing from the story: The Ticking Clock. This is an essential element in most theatre, novels films or television programmes. The Ticking Clock puts time limits on when the protagonist must resolve a problem and gives a deadline for events to happen. It creates urgency, raising the tension, and makes audiences care more about the outcome. In Rear Window (sorry for the spoiler) it’s the Thorwald murder.

For the next three days I spent looking at all of the characters and playing with different scenarios within the neighbourhood. I’m still in the middle of developing some urgencies for characters- and the overall plot- this will take another few weeks or months to develop.

I would like to thank Belltable: Connect for coming up with this incredible opportunity. It’s fantastic to be given the opportunity to start a new project. I’m really enjoying working on it and I’m excited for its potential. I’m going to continue to think, plot and write for the next few weeks and months.